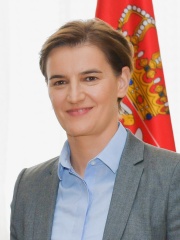 Ana Brnabić (Serbian Cyrillic: Ана Брнабић, pronounced [âna bř̩nabitɕ]; born 28 September 1975) is a Serbian politician serving as the prime minister of Serbia since 2017. She is the first woman and first openly gay person to hold the office.She entered government as the minister of public administration and local self-government from 11 August 2016 until 29 June 2017, under Prime Minister Aleksandar Vučić and Acting Prime Minister Ivica Dačić. Read more on Wikipedia

Among politicians, Ana Brnabić ranks 8,700 out of 15,577. Before her are Spencer Perceval, Musa of Parthia, Mang of Xia, Viacheslav Chornovil, Liutpert, and Hedju Hor. After her are Dean Rusk, Carl, 3rd Prince of Leiningen, Susanna Agnelli, Friedrich, Prince of Waldeck and Pyrmont, Sergei Korsakoff, and Hantili II.