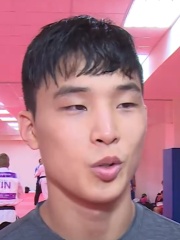 An Baul (Hangul: 안바울, Korean pronunciation: [an.ba.ul]; born 25 March 1994) is a South Korean judoka.An is the former half-lightweight World Champion. He rose to prominence by becoming South Korea's first half-lightweight champion in more than a decade. Before transitioning to senior level, An was a noted junior judoka, where he was also junior World Champion. Read more on Wikipedia

Page views of An Bauls by language

Among athletes, An Baul ranks 2,003 out of 3,055. Before him are Martina Hrašnová, Janne Holmén, Abubaker Kaki Khamis, Jéssica Augusto, Iouri Podladtchikov, and Charles Kamathi. After him are Wu Jingyu, Ryan Brathwaite, Olga Kotlyarova, Jean-Guillaume Béatrix, Kianoush Rostami, and Linda Stahl.

Among ATHLETES In South Korea