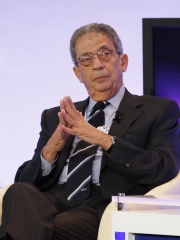 Amr Moussa (Arabic: عمرو موسى‎, IPA: [ˈʕɑmɾe mæˈħæmmæd ˈmuːsæ], Amr Muhammad Moussa; born 3 October 1936) is an Egyptian politician and diplomat who was the Secretary-General of the Arab League, a 22-member forum representing Arab states, from 1 June 2001 to 1 June 2011. Previously he served in the government of Egypt as Minister of Foreign Affairs from 1991 to 2001. Read more on Wikipedia

Since 2007, the English Wikipedia page of Amr Moussa has received more than 100,462 page views. His biography is available in 28 different languages on Wikipedia. Amr Moussa is the 36th most popular diplomat, the 304th most popular biography from Egypt (down from 275th in 2019) and the 3rd most popular Egyptian Diplomat.

Among DIPLOMATS In Egypt

Among diplomats born in Egypt, Amr Moussa ranks 3. Before him are Boutros Boutros-Ghali (1922) and Mohamed ElBaradei (1942).