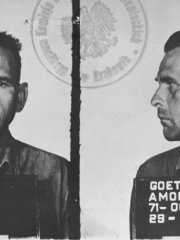 Amon Leopold Göth (pronounced [ˈɡøːt]; alternative spelling Goeth; 11 December 1908 – 13 September 1946; audio ) was an Austrian SS functionary and war criminal. He served as the commandant of the Kraków-Płaszów concentration camp in Płaszów in German-occupied Poland for most of the camp's existence during World War II. Göth was tried after the war by the Supreme National Tribunal of Poland at Kraków and was found guilty of personally ordering the imprisonment, torture, and extermination of individuals and groups of people. He was also convicted of homicide, the first such conviction at a war crimes trial, for "personally killing, maiming and torturing a substantial, albeit unidentified number of people."Göth was executed by hanging not far from the former site of the Płaszów camp. Read more on Wikipedia

Since 2007, the English Wikipedia page of Amon Göth has received more than 3,312,915 page views. His biography is available in 28 different languages on Wikipedia making him the 25th most popular extremist.

Among EXTREMISTS In Austria