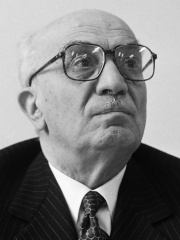 Amintore Fanfani (Italian pronunciation: [aˈmintore faɱˈfaːni]; 6 February 1908 – 20 November 1999) was an Italian politician and statesman, who served as 32nd prime minister of Italy for five separate terms. He was one of the best-known Italian politicians after the Second World War and a historical figure of the left-wing faction of Christian Democracy. He is also considered one of the founders of the modern Italian centre-left.Beginning as a protégé of Alcide De Gasperi, Fanfani achieved cabinet rank at a young age and occupied all the major offices of state over the course of a forty-year political career. Read more on Wikipedia

Among politicians, Amintore Fanfani ranks 4,713 out of 15,710. Before him are Raymond of Burgundy, Ueli Maurer, Princess Louise of Belgium, Princess Regina of Saxe-Meiningen, Emperor Go-Mizunoo, and Moussa Traoré. After him are Gung Ye, John Parricida, Yaqub Beg, Frederick I, Margrave of Meissen, Wonjong of Goryeo, and Aaron Burr.