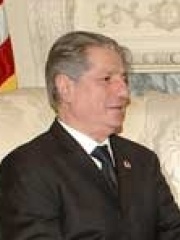 Amine Pierre Gemayel (Arabic: أمين بيار الجميٌل French pronunciation: ​[aˈmin ʒəmaˈjɛl]; (born 22 January 1942) is a Lebanese Maronite politician who served as President of Lebanon from 1982 to 1988. Born in Bikfaya, his father was Pierre Gemayel, the founder of the Kataeb Party. He worked as a lawyer, then was elected as a deputy for Northern Metn in 1970 by-election, following the death of his uncle, Maurice Gemayel, and once again in the 1972 general election. Read more on Wikipedia

Among politicians, Amine Gemayel ranks 4,559 out of 15,577. Before him are Blanche of Namur, Yang You, Nikolay Krestinsky, Stephanus of Byzantium, Ny-Hor, and Zeng Guofan. After him are Sheikh Hasina, Terauchi Masatake, Conrad Hilton, Hōjō Masako, Piers Gaveston, 1st Earl of Cornwall, and Birger, King of Sweden.