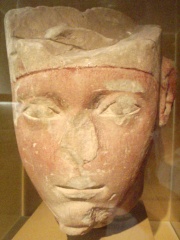 Amenhotep I () (Ancient Egyptian: jmn-ḥtp(w) /jaˌmanuwˈħatpaw/ "Amun is satisfied"; Amarna cuneiform a-ma-an-ha-at-pe or -at-pa), Amenôthes I, or Amenophis I, (,) from Ancient Greek Ἀμένωφις , additionally King Djeserkere (transliteration: Ḏsr-k3-R`), was the second Pharaoh of the 18th Dynasty of Egypt. His reign is generally dated from 1526 to 1506 BC. He was a son of Ahmose I and Ahmose-Nefertari, but had at least two elder brothers, Ahmose-ankh and Ahmose Sapair, and was not expected to inherit the throne. However, sometime in the eight years between Ahmose I's 17th regnal year and his death, his heir apparent died and Amenhotep became crown prince. Read more on Wikipedia

Amenhotep I was the first Pharaoh of the 18th dynasty of Egypt. He is most famous for his military conquests.

Page views of Amenhotep IS by language

Among politicians, Amenhotep I ranks 921 out of 15,710. Before him are Galla Placidia, Ptolemy XII Auletes, Alfonso XII of Spain, Vasili IV of Russia, Bashar al-Assad, and Haakon VII of Norway. After him are Andrei Gromyko, Augustus III of Poland, Feodor III of Russia, Lentulus Batiatus, Carol II of Romania, and Ferdinand VII of Spain.