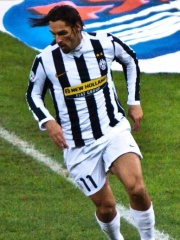 Amauri Carvalho de Oliveira (born 3 June 1980), known as Amauri, is an Italian former footballer who played as a striker. His previous clubs include Bellinzona, Parma, Napoli, Piacenza, Empoli, Messina, Chievo, Palermo, Juventus, Fiorentina and Fort Lauderdale Strikers.Although he was born in Brazil, he represented Italy once at international level in 2010, after acquiring Italian citizenship. Read more on Wikipedia

Since 2007, the English Wikipedia page of Amauri has received more than 270,234 page views. His biography is available in 33 different languages on Wikipedia making him the 3,218th most popular soccer player.

Page views of Amauris by language