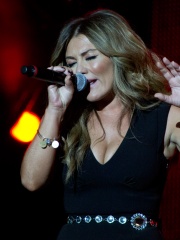 Amaia Montero Saldías (Spanish pronunciation: [aˈmaja monˈteɾo salˈdi.as]; born August 26, 1976) is a Spanish singer and songwriter mainly known as the former vocalist of the Spanish pop-band La Oreja de Van Gogh between 1996 and 2007. Amaia has sung in a variety of languages, including Basque, Spanish, Catalan, Italian, French and English. She also wrote some of the most successful singles of the band on their original versions, including "La Playa" (2000), "Mariposa" (2000) and "Puedes Contar Conmigo" (2003) among many others. Read more on Wikipedia

Since 2007, the English Wikipedia page of Amaia Montero has received more than 181,757 page views. Her biography is available in 18 different languages on Wikipedia making her the 2,051st most popular singer.

Among singers, Amaia Montero ranks 2,061 out of 3,001. Before her are The D.O.C., Corey Hart, Jess Glynne, Lia, Ana Carolina, and Sana. After her are Choi Soo-young, Maarja-Liis Ilus, Freddy Cannon, Jennifer Paige, Alyosha, and Dahyun.