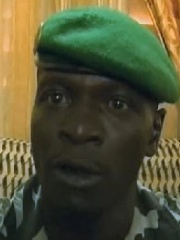 Amadou Haya Sanogo (born 1972 or 1973) is a Malian military officer who was leader of the 2012 Malian coup d'état against President Amadou Toumani Touré. He proclaimed himself the leader of the National Committee for Recovering Democracy and Restoring the State (CNRDRE). Sanogo was also said to be involved in the arrest and resignation of acting Prime Minister Cheick Modibo Diarra in December 2012, leading to the appointment of civil servant Django Sissoko as Prime Minister. Read more on Wikipedia

Since 2007, the English Wikipedia page of Amadou Sanogo has received more than 76,807 page views. His biography is available in 21 different languages on Wikipedia making him the 13,516th most popular politician.