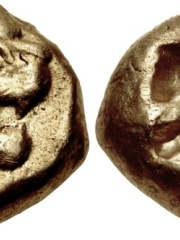 Alyattes (Lydian language: 𐤥𐤠𐤩𐤥𐤤𐤯𐤤𐤮 Walweteś; Ancient Greek: Ἀλυάττης Aluáttēs; reigned c. 635-585 BC), sometimes described as Alyattes I, was the fourth king of the Mermnad dynasty in Lydia, the son of Sadyattes, grandson of Ardys, and great-grandson of Gyges. He died after a reign of 57 years and was succeeded by his son Croesus.Alyattes was the first monarch who issued coins, made from electrum (and his successor Croesus was the first to issue gold coins). Read more on Wikipedia

Page views of Alyattes of Lydias by language

Among politicians, Alyattes of Lydia ranks 6,805 out of 15,710. Before him are Orodes III of Parthia, Ur-Nanshe, Arthur Zimmermann, Agilulf, Empress Masako, and Antonio Salandra. After him are Carlos Antonio López, Philip IV of Macedon, Alejandro Toledo, Bonosus, Mirza Muhammad Haidar Dughlat, and Pertevniyal Sultan.

Others Deceased in 560 BC