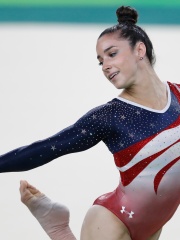 Alexandra Rose Raisman (born May 25, 1994) is a retired American gymnast and two-time Olympian. She was captain of both the 2012 "Fierce Five" and 2016 "Final Five" U.S. women's Olympic gymnastics teams which won their respective team competitions. Read more on Wikipedia

Since 2007, the English Wikipedia page of Aly Raisman has received more than 6,672,940 page views. Her biography is available in 20 different languages on Wikipedia making her the 118th most popular gymnast.

Among gymnasts, Aly Raisman ranks 130 out of 140. Before her are Maria Paseka, He Kexin, McKayla Maroney, Huang Shanshan, Karen Cockburn, and Cheng Fei. After her are Kenzō Shirai, Philipp Boy, Feng Zhe, Paul Hamm, Peter Vidmar, and Ksenia Afanasyeva.

Among GYMNASTS In United States