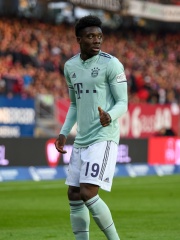 Alphonso Boyle Davies (born November 2, 2000) is a Canadian professional soccer player who plays as a left-back or winger for Bundesliga club Bayern Munich and the Canadian national team. He is considered a highly promising prospect in the media due to his explosive pace, dribbling, creativity, and crossing ability. Davies was the first player born in the 2000s to play in a Major League Soccer match. Read more on Wikipedia

Among people born in 2000, Alphonso Davies ranks 8. Before him are Lil Pump, Vinícius Júnior, Ester Expósito, Jadon Sancho, Nouri Abusahmain, and Tones and I. After him are Mackenzie Foy, Remco Evenepoel, Jace Norman, Moise Kean, Willow Smith, and Bill Davis.