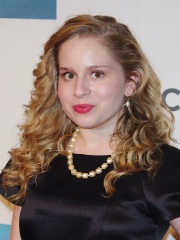 Allie Grant (born February 14, 1994) is an American film and television actress. She is best known for her role as Isabelle Hodes on the Showtime television series Weeds appearing in the series from 2005 to 2009. She also co-starred as Lisa Shay on the ABC sitcom Suburgatory. Read more on Wikipedia

Since 2007, the English Wikipedia page of Allie Grant has received more than 576,720 page views. Her biography is available in 16 different languages on Wikipedia making her the 8,748th most popular actor.