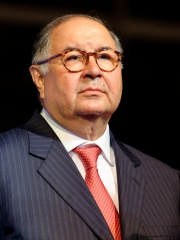 Alisher Burkhanovich Usmanov (Russian: Алишер Бурханович Усманов; Uzbek: Alisher Usmonov; born 9 September 1953) is an Uzbek-born Russian oligarch. As reported by Bloomberg Billionaires Index in 2021, Alisher Usmanov has an estimated net worth of $17.9 billion.Usmanov built his wealth through metal and mining operations, and investments, and is the majority shareholder of Metalloinvest, a Russian industrial conglomerate, which consolidated in 2006 JSC Metalloinvest's assets (the Mikhailovsky GOK and the Ural Steel) with those of Gazmetall JSC (the Lebedinsky GOK and the Oskol Electrometallurgical Plant).He owns the Kommersant publishing house. He is also a co‑owner of Russia's second-largest mobile telephone operator, MegaFon, and co-owner of the Mail.Ru group, the largest internet company in the Russian-speaking world, which owns stakes in popular web portals like Odnoklassniki, VKontakte and others. Read more on Wikipedia

Among BUSINESSPEOPLE In Uzbekistan