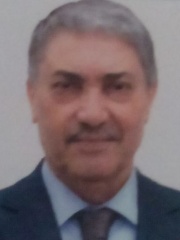 Ali Benflis (Arabic: على بن فليس; born 8 September 1944) is an Algerian politician who was Head of Government of Algeria from 2000 to 2004. In 2003, he became the general secretary of the National Liberation Front party. Benflis was a candidate in the 2004 presidential election, but the poll resulted in the re-election of Abdelaziz Bouteflika. Read more on Wikipedia

Among politicians, Ali Benflis ranks 12,063 out of 15,577. Before him are Valérie Trierweiler, Isa Mustafa, Hamed Karoui, Oisc of Kent, Fyodor Dan, and Georgios Tsitas. After him are Konstantinos Logothetopoulos, Baron Waqa, Otto Schily, Richard von Kühlmann, Nabu-mukin-zeri, and Giovanni Passannante.