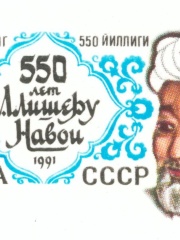 'Ali-Shir Nava'i (9 February 1441 – 3 January 1501), also known as Nizām-al-Din ʿAli-Shir Herawī (Chagatai: نظام الدین علی شیر نوایی, Persian: نظام‌الدین علی‌شیر نوایی) was a Timurid poet, writer, statesman, linguist, Hanafi Maturidi mystic and painter who was the greatest representative of Chagatai literature.Nava'i believed that his native Chagatai Turkic language was superior to Persian for literary purposes, an uncommon view at the time and defended this belief in his work titled Muhakamat al-Lughatayn (The Comparison of the Two Languages). He emphasized his belief in the richness, precision and malleability of Turkic vocabulary as opposed to Persian.Because of his distinguished Chagatai language poetry, Nava'i is considered by many throughout the Turkic-speaking world to be the founder of early Turkic literature. Read more on Wikipedia

Ali-shir nava'i is most famous for his poem "The Book of Kings" which is a retelling of the story of Rustam and Sohrab from the Shahnameh.

Among writers, Ali-Shir Nava'i ranks 331 out of 5,755. Before him are Dionysius of Halicarnassus, Graham Greene, Elfriede Jelinek, Arthur Miller, André Malraux, and Mikhail Lermontov. After him are Michael Ende, Pierre Beaumarchais, Henrik, Prince Consort of Denmark, Louise Glück, Gerhart Hauptmann, and Gao Xingjian.

Among WRITERS In Afghanistan