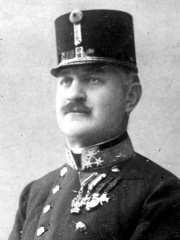 Alfred Redl (14 March 1864 – 25 May 1913) was an Austrian military officer who rose to head the Evidenzbureau, the counter-intelligence wing of the General Staff of the Austro-Hungarian Army. Redl was one of the leading figures of pre-World War I espionage; his term in office was marked by radical innovations and the use of advanced technology to ensnare foreign spies. Due to the innovations he introduced, Redl's successor, Major Maximilian Ronge, ultimately learned in 1913 that Redl was also a highly paid spy, working for the intelligence service of the Imperial Russian Army. Read more on Wikipedia

Alfred Redl was a spy for the Austro-Hungarian Empire. He was caught and executed by the Russians in 1913.

Among military personnels, Alfred Redl ranks 456 out of 1,466. Before him are Aegidius, Gongsun Zan, Hans Baur, Vjekoslav Luburić, Harold Alexander, 1st Earl Alexander of Tunis, and He Jin. After him are Huang Gai, William Westmoreland, Pierre Cambronne, August Hirt, Baiju, and Petre Dumitrescu.