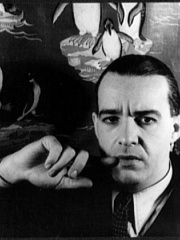 Alfred David Lunt (August 12, 1892 – August 3, 1977) was an American actor and director, best known for his long stage partnership with his wife, Lynn Fontanne, from the 1920s to 1960, co-starring in Broadway and West End productions. After their marriage, they nearly always appeared together. They became known as "the Lunts" and were celebrated on both sides of the Atlantic. Although they appeared in classics including The Taming of the Shrew, The Seagull and Pygmalion, and dark comedy by Friedrich Dürrenmatt, The Lunts were best known for their stylish performances in light comedies by Noël Coward, S. N. Behrman, Terence Rattigan and others, and romantic plays by writers such as Robert E. Read more on Wikipedia

Since 2007, the English Wikipedia page of Alfred Lunt has received more than 228,702 page views. His biography is available in 21 different languages on Wikipedia (up from 18 in 2019). Alfred Lunt is the 1,218th most popular film director (down from 998th in 2019), the 8,977th most popular biography from United States and the 351st most popular American Film Director.