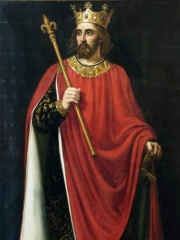 Alfonso IV (c. 890s – 933), called the Monk (Spanish: el Monje), was King of León from 925 (or 926) and King of Galicia from 929, until he abdicated in 931. When Ordoño II died in 924 it was not one of his sons who ascended to the throne of León but rather his brother Fruela II of Asturias. The exact circumstances of the succession upon Fruela's death one year later are unclear, but the son of Fruela, Alfonso Fróilaz, became king in at least part of the kingdom when his father passed. Read more on Wikipedia

Since 2007, the English Wikipedia page of Alfonso IV of León has received more than 56,579 page views. His biography is available in 26 different languages on Wikipedia making him the 4,908th most popular politician.

Page views of Alfonso IV of Leóns by language

Among politicians, Alfonso IV of León ranks 4,879 out of 14,801. Before him are Markos Vafeiadis, Bairam Khan, Emperor Heizei, Denis Thatcher, Mohammed Alim Khan, and Francisco Largo Caballero. After him are Alfonso III d'Este, Duke of Modena, Matthias Gallas, Alberic II of Spoleto, Baydu, Blanche of Anjou, and Otto Ernst Remer.