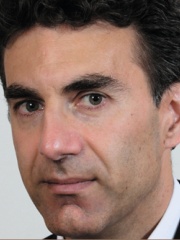 Marc d'Anna (born September 4, 1968), writing under the pen name Alexandre del Valle, is a Franco-Italian writer, professor, columnist, and political commentator. He is known primarily for his analysis of Islamic extremism, and his criticism of Erdoğan's neo-Ottoman, Islamist, and post-Kemalist Turkey. Del Valle is a proponent of the "PanWest paradigm"—the cooperation between the West and Russia against radical Islamism—and coined the concept of "Red-green-brown alliance" in 2002.His domains of interest focus on Islamic extremism, new geopolitical threats, civilizational conflicts, and terrorism, as well as Mediterranean issues such as Turkey's proposed accession to the European Union. Read more on Wikipedia