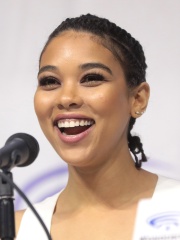 Alexandra Ruth Shipp (born July 16, 1991) is an American actress and singer who rose to prominence for portraying singer Aaliyah in the Lifetime television film Aaliyah: The Princess of R&B (2014) and Kimberly Woodruff in the Oscar-nominated film Straight Outta Compton (2015). Shipp is best known for playing Storm in the X-Men franchise, starting with X-Men: Apocalypse, and Abby Suso in the 2018 romantic comedy Love, Simon. Read more on Wikipedia

Since 2007, the English Wikipedia page of Alexandra Shipp has received more than 3,680,469 page views. Her biography is available in 21 different languages on Wikipedia making her the 7,261st most popular actor.