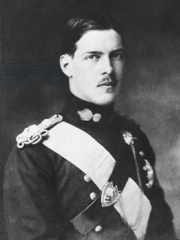 Alexander (Greek: Αλέξανδρος, Aléxandros; 1 August 1893 – 25 October 1920) was King of Greece from 11 June 1917 until his death three years later, at the age of 27, from the effects of a monkey bite. The second son of King Constantine I, Alexander was born in the summer palace of Tatoi on the outskirts of Athens. He succeeded his father in 1917, during World War I, after the Entente Powers and the followers of Eleftherios Venizelos pushed Constantine I, and his eldest son Crown Prince George, into exile. Read more on Wikipedia

Alexander the Great is most famous for his conquests of Persia, Egypt, and parts of India.

Page views of Alexander of Greeces by language

Among politicians, Alexander of Greece ranks 1,195 out of 15,710. Before him are Daniel Ortega, Abu Ubaidah ibn al-Jarrah, Asparuh of Bulgaria, Pedro I of Brazil, John, King of Denmark, and Frederick VII of Denmark. After him are Viktor Yanukovych, Louis III of France, Yang Guifei, Lazar of Serbia, Claudia Octavia, and Zewditu.