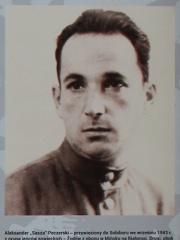 Alexander 'Sasha' Pechersky (Russian: Алекса́ндр Аро́нович Пече́рский; 22 February 1909 – 19 January 1990) was one of the organizers, and the leader, of the most successful uprising and mass-escape of Jews from a Nazi extermination camp during World War II, which occurred at the Sobibor extermination camp on 14 October 1943. In 1948, Pechersky was arrested by the Soviet authorities along with his brother during the countrywide Rootless cosmopolitan campaign against Jews suspected of pro-Western leanings but released later due in part to mounting international pressure. Pechersky was prevented by the Soviet government from leaving the country to testify in international trials related to Sobibor, including the Eichmann Trial in Israel; foreign investigators were only allowed to collect his testimony under KGB supervision. Read more on Wikipedia

Among politicians, Alexander Pechersky ranks 4,468 out of 15,710. Before him are Menander I, Paul Ryan, Antonia the Elder, Samir Amin, Emperor Ingyō, and Anita Garibaldi. After him are Emperor Muzong of Tang, Antonín Zápotocký, Eupraxia of Kiev, Rodolphe Seeldrayers, Kaykhusraw I, and Margaret Pole, Countess of Salisbury.