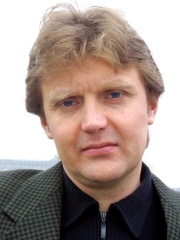 Alexander Valterovich Litvinenko (30 August 1962 or 4 December 1962 – 23 November 2006) was a British-naturalised Russian defector and former officer of the Russian Federal Security Service (FSB) who specialised in tackling organized crime. A prominent critic of Russian President Vladimir Putin, he advised British intelligence and coined the term "mafia state".In November 1998, Litvinenko and several other FSB officers publicly accused their superiors of ordering the assassination of the Russian oligarch Boris Berezovsky. Litvinenko was arrested the following March on charges of exceeding the authority of his position. Read more on Wikipedia

Alexander Litvinenko was a former Russian spy and KGB officer who defected to the United Kingdom in 2000. He was later accused of being involved in the death of Russian oligarch and Kremlin critic, Boris Berezovsky. Litvinenko died in 2006 from poisoning by radioactive polonium-210.

Among writers, Alexander Litvinenko ranks 735 out of 5,755. Before him are Raymond Carver, Julius Fučík, Alexander Griboyedov, Epicharmus of Kos, A. J. Cronin, and Marie Mancini. After him are Kōbō Abe, Mary Higgins Clark, Aubrey Beardsley, Cornelia, mother of the Gracchi, Émile Verhaeren, and Christa Wolf.