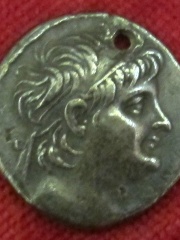 Alexander II Theos Epiphanes Nikephoros (Ancient Greek: Ἀλέξανδρος Θεός Ἐπιφανής Νικηφόρος Áléxandros Theós Épiphanḗs Nikēphóros, surnamed Zabinas; c. 150 BC – 123 BC) was a Hellenistic Seleucid monarch who reigned as the King of Syria between 128 BC and 123 BC. His true parentage is debated; depending on which ancient historian, he either claimed to be a son of Alexander I or an adopted son of Antiochus VII. Most ancient historians and the modern academic consensus maintain that Alexander II's claim to be a Seleucid was false. His surname "Zabinas" (Ζαβίνας) is a Semitic name that is usually translated as "the bought one". Read more on Wikipedia

Among people born in 190 BC, Alexander II Zabinas ranks 5. Before him are Hipparchus, Menander I, Lucius Mummius Achaicus, and Seleucus of Seleucia. After him are Servius Sulpicius Galba, Julia, Phraates I, Orodes I of Parthia, and Hypsicles. Among people deceased in 123 BC, Alexander II Zabinas ranks 1. After him are Marcus Aemilius Lepidus Porcina and Publius Rupilius.

Others Deceased in 123 BC