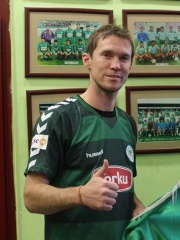 Aliaksandr Paulavich Hleb (Belarusian: Аляксандр Паўлавіч Глеб, pronounced [alʲaˈksandar ɣlʲeb]; Russian: Александр Павлович Глеб; born 1 May 1981), commonly referred to in English as Alexander Hleb, is a Belarusian former professional footballer. Hleb's natural and preferred position is attacking midfielder or "in the hole" behind the strikers, but he is often deployed on the wing. He is known for his passing, agility and dribbling ability. Read more on Wikipedia

Since 2007, the English Wikipedia page of Alexander Hleb has received more than 1,098,497 page views. His biography is available in 45 different languages on Wikipedia making him the 1,525th most popular soccer player.

Among SOCCER PLAYERS In Belarus