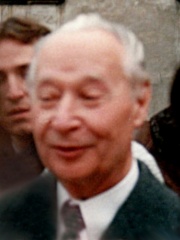 Alexander Dubček (Slovak pronunciation: [ˈalɛksandɛr ˈduptʃɛk]; 27 November 1921 – 7 November 1992) was a Slovak politician who served as the First Secretary of the Presidium of the Central Committee of the Communist Party of Czechoslovakia (KSČ) (de facto leader of Czechoslovakia) from January 1968 to April 1969. He attempted to reform the communist government during the Prague Spring but was forced to resign following the Warsaw Pact invasion in August 1968. During his leadership, under the slogan "Socialism with a human face", Czechoslovakia lifted censorship on the media and liberalized Czechoslovak society, fueling the so-called New Wave in Czechoslovak filmography. Read more on Wikipedia

Among politicians, Alexander Dubček ranks 307 out of 15,710. Before him are Hu Jintao, Constantine XI Palaiologos, Galba, Henry IV, Holy Roman Emperor, Jawaharlal Nehru, and Lyndon B. Johnson. After him are Philip IV of Spain, Sigismund, Holy Roman Emperor, Edward IV of England, Ferdinand I of Austria, Louis XI of France, and Kangxi Emperor.

Among people born in 1921, Alexander Dubček ranks 3. Before him are Prince Philip, Duke of Edinburgh and Charles Bronson. After him are Andrei Sakharov, John Rawls, Stanisław Lem, Astor Piazzolla, Suharto, Fawzia Fuad of Egypt, Michael I of Romania, Fahd of Saudi Arabia, and Yves Montand. Among people deceased in 1992, Alexander Dubček ranks 3. Before him are Marlene Dietrich and Isaac Asimov. After him are Friedrich Hayek, Grace Hopper, Willy Brandt, Menachem Begin, John Cage, Astor Piazzolla, Francis Bacon, Mikhail Tal, and Olivier Messiaen.