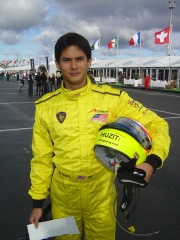 Alexander Charles Yoong Loong (simplified Chinese: 熊龙; traditional Chinese: 熊龍; pinyin: Xióng Lóng; born 20 July 1976), is a Malaysian professional racing driver of Chinese Malaysian and English parentage.Yoong began his career in saloon cars before moving into the Proton one-make series. He later raced in single-seater cars where he won the Malaysian Championship in 1995. He moved into Formula Renault in 1996 with help from sponsors but finished outside the top-10. Read more on Wikipedia

Since 2007, the English Wikipedia page of Alex Yoong has received more than 247,312 page views. His biography is available in 25 different languages on Wikipedia making him the 693rd most popular racing driver.

Among RACING DRIVERS In Malaysia

Among racing drivers born in Malaysia, Alex Yoong ranks 1. After him are Fairuz Fauzy (1982).