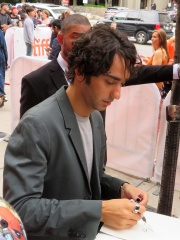 Alexander Draper Wolff (born November 1, 1997) is an American actor, singer, and musician. He first gained recognition for starring alongside his older brother Nat in the Nickelodeon musical comedy series The Naked Brothers Band (2007–09), which was created by the boys' mother Polly Draper. Wolff and his brother released two soundtrack albums for the series, The Naked Brothers Band and I Don't Want to Go to School, which were co-produced by their father Michael Wolff. Read more on Wikipedia

Since 2007, the English Wikipedia page of Alex Wolff has received more than 4,628,108 page views. His biography is available in 19 different languages on Wikipedia. Alex Wolff is the 9,333rd most popular actor, the 14,282nd most popular biography from United States and the 4,787th most popular American Actor.