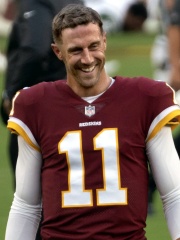 Alexander Douglas Smith (born May 7, 1984) is an American football quarterback for the Washington Football Team of the National Football League (NFL). He played college football for the Utah Utes, where he was named the Mountain West Conference Player of the Year in 2004 and led Utah to a victory over Pittsburgh at the 2005 Fiesta Bowl, after which Utah finished in the national top five. Following his college career, Smith was selected by the San Francisco 49ers with the first overall pick in the 2005 NFL Draft. Read more on Wikipedia

Since 2007, the English Wikipedia page of Alex Smith has received more than 4,922,109 page views. His biography is available in 16 different languages on Wikipedia making him the 40th most popular american football player.

Among american football players, Alex Smith ranks 43 out of 43. Before him are Antonio Brown, Adrian Peterson, Matt Ryan, Troy Polamalu, Ed Reed, and Reggie Bush. After him are Brian Urlacher, J. J. Watt, and Sam Bradford.