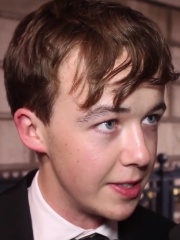 Alexander Jonathan Lawther (born May 4, 1995) is an English actor. He is known for portraying James in the Channel 4 series The End of the F***ing World (2017–2019) and for his acclaimed role as Kenny in the season three episode "Shut Up and Dance" of the Netflix series Black Mirror (2016). He became well-known to the general public after originating the role John Blakemore in Sir David Hare's South Downs on the West End and established himself in the film industry after playing the role of young Alan Turing in his feature film debut The Imitation Game (2014), for which he won the London Film Critics' Circle Award for Young British Performer of the Year. Read more on Wikipedia

Since 2007, the English Wikipedia page of Alex Lawther has received more than 3,430,446 page views. His biography is available in 17 different languages on Wikipedia making him the 7,551st most popular actor.