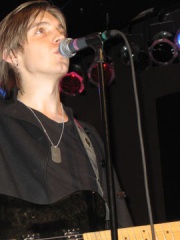 Alexander Max Band (born June 8, 1981) is an American singer, songwriter, musician, record producer and actor, best known for his work under the band name The Calling and their hit song "Wherever You Will Go", which topped the Adult Top 40 for 23 weeks, making it the second-longest-running number 1 in the chart's history and later named the number 1 song of the decade of the 2000s on the Adult Pop Charts by Billboard magazine. Along with friend and fellow songwriter Aaron Kamin, lead guitarist of The Calling, they achieved success with the release of two studio albums; their debut album, Camino Palmero, sold over 5 million copies worldwide and was certified Gold by RIAA, and their second album, Two, sold over 1.5 million copies, achieving hits across the world with the singles "Our Lives", and "Things Will Go My Way". As a solo artist, Alex Band is well known for providing the vocals and face to the top 5 hit "Why Don't You & I" with Carlos Santana in 2004. In 2008, he created his own record label, AMB Records, and released a five-song EP entitled Alex Band EP. Read more on Wikipedia

Among singers, Alex Band ranks 2,347 out of 3,541. Before him are Nuno Resende, Maarja-Liis Ilus, Gianna Terzi, Jain, Mýa, and Shin Ji-min. After him are Joey McIntyre, Doja Cat, Charlie Wilson, Fabri Fibra, Alyosha, and Mohsen Namjoo.