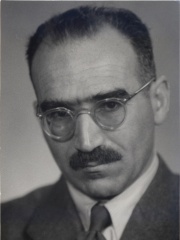 Aleksander Ford (born Mosze Lifszyc; 24 November 1908 in Kiev, Russian Empire – 4 April 1980 in Naples, Florida, United States) was a Polish film director; and head of the Polish People's Army Film Crew in the Soviet Union during World War II. Following the war he was appointed director of the Film Polski company. In 1948 he was appointed as a professor of the National Film School in Łódź (Państwowa Wyższa Szkoła Filmowa). Roman Polanski was among his students. Read more on Wikipedia

Since 2007, the English Wikipedia page of Aleksander Ford has received more than 37,647 page views. His biography is available in 16 different languages on Wikipedia making him the 703rd most popular film director.