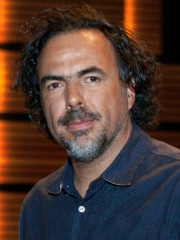 Alejandro González Iñárritu (; American Spanish: [aleˈxandɾo ɣonˈsales iˈɲaritu]; born 15 August 1963) is a Mexican film director, producer, and screenwriter. He is known for telling international stories about the human condition, and his projects have garnered critical acclaim and numerous accolades. His debut film, Amores Perros, premiered at the Cannes Film Festival and won the Critics' Week Grand Prize and was nominated for an Academy Award for Best Foreign Language Film in 2000. Read more on Wikipedia

Since 2007, the English Wikipedia page of Alejandro González Iñárritu has received more than 4,927,816 page views. His biography is available in 62 different languages on Wikipedia making him the 143rd most popular film director.

Among FILM DIRECTORS In Mexico

Among film directors born in Mexico, Alejandro González Iñárritu ranks 2. Before him are Alfonso Cuarón (1961). After him are Guillermo del Toro (1964), Emilio Fernández (1904), and Mario Van Peebles (1957).