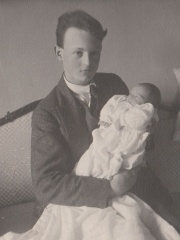 Albrecht, Duke of Bavaria (Albrecht Luitpold Ferdinand Michael; 3 May 1905 – 8 July 1996) was the son of the last crown prince of Bavaria, Rupprecht, and his first wife, Duchess Marie Gabrielle in Bavaria. He was the only child from that marriage that reached adulthood. Read more on Wikipedia

Page views of Albrecht, Duke of Bavarias by language

Among noblemen, Albrecht, Duke of Bavaria ranks 302 out of 843. Before him are Philibert I, Duke of Savoy, Duke Maximilian Emanuel in Bavaria, Leopold IV, Duke of Austria, William Adelin, Margaret, Maid of Norway, and Fulk III, Count of Anjou. After him are Duchess Maria Dorothea of Württemberg, Amadeus V, Count of Savoy, Princess Louise Margaret of Prussia, Elizabeth of Sicily, Queen of Hungary, Amadeus VII, Count of Savoy, and Euphrosyne of Polotsk.

Among noblemen born in Germany, Albrecht, Duke of Bavaria ranks 44. Before him are Princess Sophie of Saxony (1845), Christian Albert, Duke of Holstein-Gottorp (1641), Duchess Helene of Mecklenburg-Schwerin (1814), John Casimir, Count Palatine of Kleeburg (1589), Ernest Augustus, Crown Prince of Hanover (1845), and Duke Maximilian Emanuel in Bavaria (1849). After him are Princess Louise Margaret of Prussia (1860), Frederica of Mecklenburg-Strelitz (1778), Johann II, Duke of Saxe-Weimar (1570), Elizabeth Charlotte of the Palatinate, Electress of Brandenburg (1597), Charles Alexander, Duke of Württemberg (1684), and John Adolf, Duke of Holstein-Gottorp (1575).