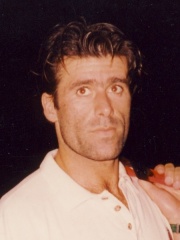 Alberico Evani (Italian pronunciation: [albeˈriːko eˈvaːni]; born 1 January 1963), sometimes misspelled as Alberigo Evani, is an Italian football manager and former player, who was deployed as a midfielder. He started his club career with Milan, where he spent the majority of his playing career, winning several trophies during his 13 seasons at the club, including, three Serie A titles and two European Cups; he later also played for Sampdoria, Reggiana, and Carrarese. At international level, he represented Italy at the 1994 FIFA World Cup, where they reached the final. Read more on Wikipedia