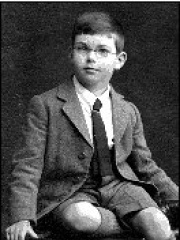 Alan Wilson Watts (6 January 1915 – 16 November 1973) was a British writer and speaker known for interpreting and popularising Buddhism, Taoism, and Hinduism for a Western audience. Born in Chislehurst, England, he moved to the United States in 1938 and began Zen training in New York. He received a master's degree in theology from Seabury-Western Theological Seminary and became an Episcopal priest in 1945. Read more on Wikipedia

Since 2007, the English Wikipedia page of Alan Watts has received more than 5,158,962 page views. His biography is available in 31 different languages on Wikipedia making him the 504th most popular philosopher.

Among philosophers, Alan Watts ranks 502 out of 1,005. Before him are Ari Thorgilsson, Pierre Duhem, Zhiyi, Eric Voegelin, William of Champeaux, and Günther Anders. After him are Su Song, Victor Cousin, Stein Rokkan, Peter Sloterdijk, Alain de Benoist, and Dicaearchus.