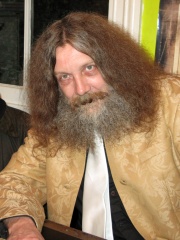 Alan Moore (born 18 November 1953) is an English writer known primarily for his work in comic books including Watchmen, V for Vendetta, The Ballad of Halo Jones, Swamp Thing, Batman: The Killing Joke and From Hell. Regarded by some as the best comics writer in the English language, he is widely recognized among his peers and critics. He has occasionally used such pseudonyms as Curt Vile, Jill de Ray, and Translucia Baboon; also, reprints of some of his work have been credited to The Original Writer when Moore requested that his name be removed.Moore started writing for British underground and alternative fanzines in the late 1970s before achieving success publishing comic strips in such magazines as 2000 AD and Warrior. Read more on Wikipedia

Among comic artists, Alan Moore ranks 21 out of 174. Before him are Morris, Zdeněk Miler, Steve Ditko, Tsugumi Ohba, Rumiko Takahashi, and Georges Wolinski. After him are Leiji Matsumoto, Will Eisner, Quino, Milo Manara, André Franquin, and Don Rosa.

Among COMIC ARTISTS In United Kingdom