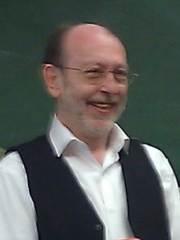 Alain de Benoist (; French: [alɛ̃ də bənwa]; born 11 December 1943) – also known as Fabrice Laroche, Robert de Herte, David Barney, and other pen names – is a French journalist and political philosopher, a founding member of the Nouvelle Droite ("New Right"), and the leader of the ethno-nationalist think tank GRECE. Principally influenced by thinkers of the German Conservative Revolution, de Benoist is opposed to Christianity, the rights of man, neoliberalism, representative democracy, egalitarianism; and what he sees as embodying and promoting those values, namely the United States. He theorized the notion of ethnopluralism, a concept which relies on preserving and mutually respecting individual and bordered ethno-cultural regions.His work has been influential with the alt-right movement in the United States, and he presented a lecture on identity at a National Policy Institute conference hosted by Richard B. Read more on Wikipedia