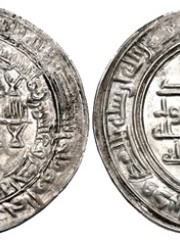 Abū Isḥāq Muḥammad ibn Hārūn al-Rashīd (Arabic: أبو إسحاق محمد بن هارون الرشيد‎; October 796 – 5 January 842), better known by his regnal name Al-Muʿtaṣim biʾllāh (المعتصم بالله, "he who seeks refuge in God"), was the eighth Abbasid caliph, ruling from 833 until his death in 842. A younger son of Caliph Harun al-Rashid, he rose to prominence through his formation of a private army composed predominantly of Turkic slave-soldiers (ghilmān). This proved useful to his half-brother, Caliph al-Ma'mun, who employed al-Mu'tasim and his Turkish guard to counterbalance other powerful interest groups in the state, as well as employing them in campaigns against rebels and the Byzantine Empire. Read more on Wikipedia

Al-mu'tasim was the second Abbasid caliph, and is most famous for his military campaigns against the Byzantine Empire.

Page views of Al-Mu'tasims by language

Among politicians, Al-Mu'tasim ranks 1,376 out of 15,710. Before him are Zbigniew Brzezinski, Algirdas, Warren G. Harding, Philoctetes, Olaf II of Denmark, and Teti. After him are Ludwig I of Bavaria, Henry I, Duke of Guise, Abijah of Judah, Carloman II, Ramiz Alia, and Christopher of Bavaria.