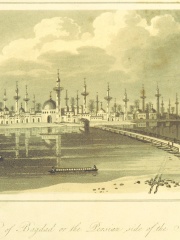 Al-Ashʿarī (الأشعري; full name: Abū al-Ḥasan ʿAlī ibn Ismāʿīl ibn Isḥāq al-Ashʿarī; c. 874–936 (AH 260–324), reverentially Imām al-Ashʿarī) was an Arab Sunni Muslim scholastic theologian and eponymous founder of Ashʿarism or Asharite theology, which would go on to become "the most important theological school in Sunni Islam".According to scholar Jonathan A.C. Brown, although "the Ash'ari school of theology is often called the Sunni 'orthodoxy,'" ""the original ahl al-hadith, early Sunni creed from which Ash'arism evolved has continued to thrive alongside it as a rival Sunni 'orthodoxy' as well." According to Brown this competing orthodoxy exists in the form of the "Hanbali über-Sunni orthodoxy".Al-Ashʿarī was notable for taking an intermediary position between the two diametrically opposed schools of theological thought prevalent at the time. He opposed both the Muʿtazilites, who advocated the extreme use of reason in theological debate and believed the Quran was created, as opposed to uncreated. Read more on Wikipedia

Al-Ash'ari is most famous for his belief that the Qur'an was created, not eternal.

Page views of Al-Ash'aris by language

Among philosophers, Al-Ash'ari ranks 254 out of 1,089. Before him are Nicole Oresme, Ibn al-Nafis, Julius Evola, Marsilius of Padua, Otto Weininger, and Arcesilaus. After him are Speusippus, Bias of Priene, Xenocrates, Raymond Aron, Moritz Schlick, and Bruno Bauer.

Among PHILOSOPHERS In Iraq