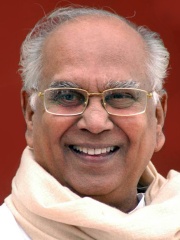 Akkineni Nageswara Rao (20 September 1924 – 22 January 2014), widely known as ANR, was an Indian film actor and producer, known for his work predominantly in Telugu cinema. He starred in many landmark films in his seventy five-year career, becoming one of the most prominent figures in the history of Indian cinema. He is considered one of the greatest and most successful actors of Indian cinema and one of the two pillars of Telugu Cinema, along with N.T.Rama Rao. Read more on Wikipedia

Since 2007, the English Wikipedia page of Akkineni Nageswara Rao has received more than 2,561,956 page views. Her biography is available in 18 different languages on Wikipedia making her the 5,265th most popular actor.