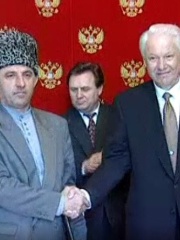 Akhmed Halidovich Zakayev (Chechen: Заки Хьалид кlант Ахьмад, Zaki Halid-khant Ahmad, Russian: Ахмед Халидович Закаев, Akhmed Khalidovich Zakayev; born 26 April 1959) is a former Deputy Prime Minister and Prime Minister of the unrecognised Chechen Republic of Ichkeria (ChRI). He was also the Foreign Minister of the Ichkerian government, appointed by Aslan Maskhadov shortly after his 1997 election, and again in 2006 by Abdul Halim Sadulayev. During the First Chechen war Zakayev took part in the battles for Grozny and other military operations, as well as in high-level negotiations with the Russian side.In 2002, Russia accused him, by then in exile, of having been involved in a series of crimes including involvement in acts of terrorism. Read more on Wikipedia

Since 2007, the English Wikipedia page of Akhmed Zakayev has received more than 200,561 page views. His biography is available in 18 different languages on Wikipedia making him the 12,540th most popular politician.