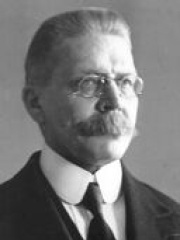 Aimo Kaarlo Cajander (4 April 1879 – 21 January 1943) was the Prime Minister of Finland up to the Winter War.Cajander was born in Uusikaupunki, and became a botanist, a professor of forestry 1911–34; director-general for Finland's Forest and Park Service 1934–1943; Prime Minister in 1922, 1924, and 1937–1939; chairman of the National Progressive Party 1933–1943; and Member of Parliament. Cajander came into politics in 1922 when President Ståhlberg asked him to take office of prime minister. He had not earlier participated actively in politics. Read more on Wikipedia

Among politicians, Aimo Cajander ranks 7,350 out of 15,710. Before him are Archduke Alexander Leopold of Austria, Irene Laskarina, Dmitry Manuilsky, Malmfred of Kiev, Agila I, and Léon M'ba. After him are Charles II August, Duke of Zweibrücken, Xiao Jia, Geoffrey I of Villehardouin, Kurunta, Rosamund, and William II, Elector of Hesse.