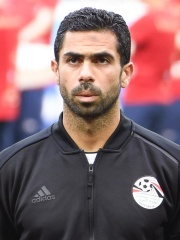 Ahmed Fathi Abdelmonem Ahmed Ibrahim (Arabic: أحمد فتحي‎; born 10 November 1984) is an Egyptian professional footballer who plays for Al Ahly. Born in Banha, he has played a variety of roles in the midfield, including right and defensive midfield and has also occasionally played in the right back role for club and country. He started his career with Egyptian side Ismaily SC before moving to England to play in the Premier League with Sheffield United in 2007. Read more on Wikipedia

Since 2007, the English Wikipedia page of Ahmed Fathy has received more than 203,640 page views. His biography is available in 25 different languages on Wikipedia making him the 5,923rd most popular soccer player.