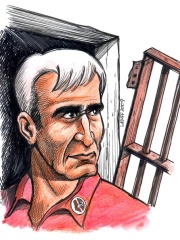 Ahmad Sa'adat (also transliterated from Arabic as Ahmed Sadat/Saadat, Arabic: احمد سعدات; born 1953), also known as Abu Ghassan, is a Palestinian militant and Secretary-General of the Popular Front for the Liberation of Palestine (PFLP), a Marxist, Palestinian nationalist organisation. Sa'adat graduated in 1975 from the UNRWA Teachers College, Ramallah, specializing in Mathematics. Sa'adat was elected Secretary-General of the PFLP by its Central Committee in October 2001, to succeed Abu Ali Mustafa, after Mustafa was assassinated by Israel during the Second Intifada. Read more on Wikipedia

Since 2007, the English Wikipedia page of Ahmad Sa'adat has received more than 59,635 page views. His biography is available in 15 different languages on Wikipedia making him the 159th most popular extremist.

Among EXTREMISTS In Palestine

Among extremists born in Palestine, Ahmad Sa'adat ranks 2. Before him are Ahmed Jabari (1960).