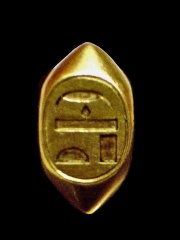 Ahhotep I (Ancient Egyptian: jꜥḥ-ḥtp(.w), alternatively Anglicized Ahhotpe or Aahhotep, "Iah (the Moon) is satisfied") was an ancient Egyptian queen who lived circa 1560–1530 BC, during the end of the Seventeenth Dynasty of Egypt. She was the daughter of Queen Tetisheri (known as Teti the Small) and Senakhtenre Ahmose, and was probably the sister, as well as the queen consort, of Pharaoh Seqenenre Tao ll. Ahhotep I had a long and influential life. Read more on Wikipedia

Page views of Ahhotep IS by language

Among politicians, Ahhotep I ranks 3,221 out of 15,710. Before her are Allen Dulles, Alp-Tegin, Al-Nasir, Marie Anne de Bourbon, Procopius, and Cardinal-Infante Ferdinand of Austria. After her are Uriah the Hittite, Tomislav of Croatia, Reynaldo Bignone, Thrasamund, Sun Liang, and Emperor Go-Yōzei.