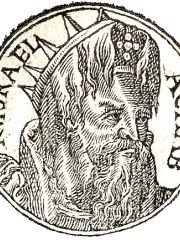 Ahab (Hebrew: אַחְאָב‎, Modern: 'Aẖ'av, Tiberian: ʼAḥʼāḇ; Akkadian: 𒀀𒄩𒀊𒁍 Aḫâbbu [a-ḫa-ab-bu]; Koinē Greek: Ἀχαάβ Achaáb; Latin: Achab) was the seventh king of Israel, the son and successor of King Omri and the husband of Jezebel of Sidon, according to the Hebrew Bible.[1 Kings 16:29-34] The Hebrew Bible presents Ahab as a wicked king, particularly for condoning Jezebel's influence on religious policies and his principal role behind Naboth's arbitrary execution. The existence of Ahab is historically supported outside the Bible. Read more on Wikipedia

Since 2007, the English Wikipedia page of Ahab has received more than 1,062,695 page views. His biography is available in 45 different languages on Wikipedia. Ahab is the 680th most popular politician (up from 685th in 2019), the 6th most popular biography from Lebanon (down from 3rd in 2019) and the 4th most popular Lebanese Politician.

Ahab is most famous for being the protagonist in Herman Melville's novel, Moby Dick.

Page views of Ahabs by language

Among politicians, Ahab ranks 680 out of 15,710. Before him are Felix Dzerzhinsky, Louis IV, Holy Roman Emperor, Charles IX of Sweden, Ladislaus the Posthumous, Boris III of Bulgaria, and Kurt Waldheim. After him are John Zápolya, Yaroslav the Wise, Henry III of England, Józef Piłsudski, Marwan I, and Abd al-Rahman I.

Others Deceased in 852 BC