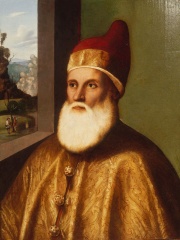 Agostino Barbarigo (3 June 1419 – 20 September 1501) was Doge of Venice from 1486 until his death in 1501. While he was Doge, the imposing Clock Tower in the Piazza San Marco with its archway through which the street known as the Merceria leads to the Rialto, was designed and completed. A figure of the Doge was originally shown kneeling before the lion of Venice on the top storey below the bell but this was removed by the French in 1797 after Venice had surrendered to Napoleon.In 1495 he created an Italian coalition to push back Charles VIII of France from Italy, which led to the Battle of Fornovo during the French retreat from Italy. Read more on Wikipedia

Among people born in 1420, Agostino Barbarigo ranks 10. Before him are Andrea del Castagno, George of Poděbrady, Mahmud Pasha Angelović, Sesshū Tōyō, João Vaz Corte-Real, and Abdal-Latif Mirza. After him are Barthélemy d'Eyck, Nicolas Jenson, Luciano Laurana, Niccolò Antonio Colantonio, and Pedro Pardo de Cela. Among people deceased in 1501, Agostino Barbarigo ranks 3. Before him are Ali-Shir Nava'i and John I Albert. After him are Gaspar Corte-Real, Mesih Pasha, Sigismund, Duke of Bavaria, Konstantin Mihailović, Constantine Lascaris, and Margaret of Thuringia.